A moment in time by Nell Schofield

A throwback to Sydney in the 1970s and 90s, a paradisiac place and city with a kind of promise held for people chasing dreams

Queen Street, Woollahra is part of my white girl song line. In the late 1960s, I scrawled my name in wet cement outside our home there, marking my territory, asserting my existence.

Every day I walked up and down what was then very much a working class street with my younger twin sisters, to and from Woollahra Demonstration School. We were demonstrating good learning techniques and teacher education in a Sydney eastern suburb whose Indigenous name means ‘camp, meeting ground or sitting down place’. Pottery, woodwork, spinning and weaving were all on the curriculum and we were allowed time out to rehearse Jesus Christ Superstar in the playground shed for no other reason than we were obsessed with it.

We took tap dancing classes after school and sometimes our babysitter would pick us up in her gold glitter beach buggy, much to the envy of our classmates. Her husband was importing them and, it transpired, a whole lot more besides! Then one day he disappeared. We didn’t talk about it. Nor about the fact that my father’s friend Roderick suddenly became Ros. These were just the sort of things that happened back then.

Dad was a local heritage activist and occasionally I’d be allowed to take a day off from school to demonstrate in another capacity to save an old building from demolition. My best friend Hannah was Germaine Greer’s goddaughter so we’d also march with her for Women’s Liberation whenever she was at the helm of a protest, which was exhilarating. But by far the most thrilling thing we did was to accept an invitation to ‘Step Into Paradise’ at the 1975 matinee of Flamingo Follies.

The invitations were addressed to our respective mothers, but we managed to wrangle our way into the matinee of this fashion parade by Linda Jackson and Jenny Kee at the Bondi Pavilion Theatre. Gorgeous girls frolicked in frocks made of colourful silk and chiffon while others wore hand painted arty dresses and retro beach wear. The music was hip and everyone, both on and off stage, was having a ball. This was a seductive, playful vision of an Australia we wanted in on.

The progressive politics of Gough Whitlam’s Labor leadership had created a world where the arts were thriving. Australia was expressing a bold and optimistic cultural voice that left the conservatives quaking in their sensible shoes. We were rocking a very different look including Peter Tully’s Oz Pop jewellery and replicas of Little Nell’s gold glitter tap shoes. The Rocky Horror Picture Show was a major influence at the time, expanding our ideas of sexuality somewhat. With its Australian director and cast members, like the aforementioned performer and her co-star Kate Fitzpatrick, it was a wild expression of the unleashed mood of our elders and we looked up to it in awe.

Aussies were taking renewed pride in their country and Sydney, with its sparkling new Opera House, was blasting off on a modern tangent. Bondi Beach was a particularly sunny epicentre where, at 13, I taught myself to surf. There were only a handful of other girls jostling for a spot in the lineup and there certainly weren’t any surf schools. It was trial by dumper and blood was spilt but the empowerment it offered when that perfect wave was caught went straight to my head. I was at Sydney Girls High by this stage and would go surfing before and after school to immerse myself in that fabulous feeling of strength and freedom. It made me think that anything was possible. And when I finally finished all those HSC exams and scored the lead in Puberty Blues I knew it was true.

With my first pay cheque I went straight to Linda Jackson and she made me a fabulous bush print coat with the words ‘Wanna Gunna’ printed in gum leaves on the back. So cocky! I still have it. I then hooked up with fellow film star Baz Luhrmann and we started our own theatre company. Linda’s partner Fran did the publicity and put us in touch with Harry M. Miller who helped us with the opening night extravaganza guest list. The following year we got into NIDA and created a short play called Strictly Ballroom which we toured to Bratislava behind the iron curtain causing a revolution among the Soviet theatre students. It was all too, too exciting.

But something happened around 1988 that changed the whole mood of the city. It was Australia’s Bicentennial year and it was like a balloon being blown up to maximum capacity. Like the idea of endless economic growth, it simply couldn’t go on like this. Or could it? Amazingly, that same year, I scored a journalistic assignment for Vogue Living to travel to Antarctica and report back on these new cruises that were taking tourists there. It was a dream come true.

Linda made me a penguin print padded coat and a glacier dress to wear there but once onboard I heard about this new thing called climate change which stopped me in my exuberant tracks. Expert lecturers said that rising carbon dioxide levels in the atmosphere, caused largely by burning coal, were heating up the planet and causing the ice to melt both here and in the Arctic. And were on track to make it melt a whole lot more.

Upon my return I became involved in the environment movement, signing up to every organisation I could to try to do something about it. Linda, Fran and her business partner Lydia and I bought a block of land in the bush in an attempt to future proof ourselves. But three years later, in 1991, our little piece of paradise came under a coal exploration licence. A neighbour told us that the state government had sold the rights to a foreign company to explore for and by association dig up everything but the topsoil.

Beating my head against the anti-coal face became my default for many years thereafter, trying to protect not only our magical valley but the entire climate we all rely on. I trained as a climate leader with Al Gore and spoke publicly about the urgent need to change our ways. But people didn’t want to hear. They didn’t want to meet with their MPs and be dismissed as I had on so many previous occasions. Why should they reduce their energy consumption when their representatives on both sides of politics were so embedded in the coal industry? I met with a Director of the coal company that was threatening our land, hoping to appeal to her role as a mother of children whose future was imperiled by her unabashed advocacy of our nations’ prime fossil fuel export. “I’m not giving up my oven!” she barked at me.

It seemed no one in the city was prepared to give an inch. All they cared about was their mortgage and the latest episode of Masterchef. Disconnected from the land, from the very environment they were intrinsically a part of, many Sydneysiders became increasingly superficial. Despite the privilege of living in a little flat overlooking the ever sensuous harbour, I found myself fleeing the Big Smoke for the country at every opportunity.

“Linda made me a penguin print padded coat and a glacier dress to wear there but once onboard I heard about this new thing called climate change which stopped me in my exuberant tracks.”

And then nature itself became unsettling. Rivers dried up, fires ravaged the landscape. Wild winds evaporated what little water we held on this, the driest inhabited continent, as big agri-business sucked up the rest. In the city, we continued to flush drinking water down the toilet and on out to sea as if it wasn’t precious. Our leaders, far removed from the ideals of Gough and his gang, lacked any vision to give us hope, and continued to flagrantly wreck the favourable conditions for life on our home planet for ourselves and all the other incredible species that we share it with.

As an activist, I turned my back on art, thinking it was a frivolous luxury in the face of climate chaos. Now I’ve embraced it, believing it’s the only thing that can inspire more love and respect for the incredible place we call home. As philosopher and former US soldier Roy Scranton writes in his book Learning to Die in the Anthropocene, “The fate of the humanities, as we confront the end of modern civilisation, is the fate of humanity itself.” 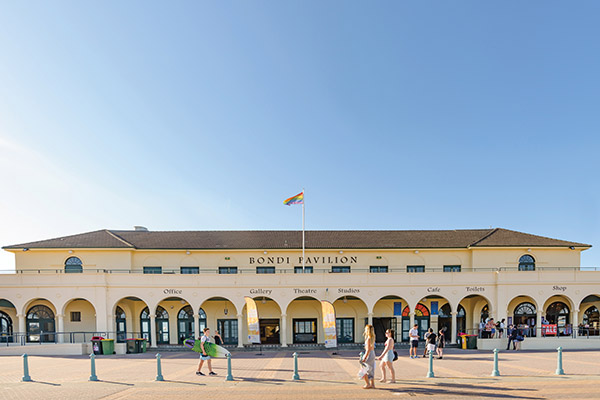 Almost 45 years on from that wondrous Flamingo Follies fashion parade at the Bondi Pavilion, the Powerhouse Museum in Sydney has staged a retrospective exhibition of Linda Jackson and Jenny Kee’s work called ‘Step Into Paradise’. Spanning their collaborative and independent creations over more than four decades, the show celebrates a vision of Australia that gives us, if not hope for redemption, at least a cathedral in which to contemplate all that we have – the blood red life force of our waratahs, the rich rainbows of opals fossilised in rock, even the penguins of our Antarctic Territory, all interpreted in wonderful wearable art. I may be biased but this is an exhibition that could, if toured to the major galleries of the world, spread an inspirational message and a powerful positive vision for everyone to hold close in these crazy times.

The NSW state government plans to move the Powerhouse Museum out of our city to Parramatta and redevelop the site for residential purposes. No major city in the world removes a cultural institution in its heart, especially not one initially established in 1880 to house our applied arts and sciences. Its loss will impoverish us. But the ever inflating balloon keeps getting filled with hot air ignorantly blown by politicians who care not about the value such institutions impart to its citizens through exhibitions like ‘Step Into Paradise’, let alone the ultimate impacts of our coal exports.

So now I’m surrounding myself with creativity and beauty again. I’m back in Queen Street, curating exhibitions of gorgeous home grown jewellery in the 150 year old building that my father saved and restored with the idea of creating, among other things, a local performance space. This space hosted the 1978 Flamingo Follies and I’m revisiting dad’s dreams to include more inspiring shows in the future including a celebration of my mother’s fiftieth anniversary in the jewellery business here. My name is still vaguely discernible in the concrete gutter outside and the other day I noticed that another placemaker has carved a new message in the cement ‘A Moment In Time’. It certainly was. And in this era of hard surfaces and even harder hearts, we need to make each and every moment matter more than ever. Nell is a NIDA acting graduate whose passion is bringing the creative sector and conservation movement together. In 2007, Nell trained with Al Gore as one of his Climate Leaders and has worked with The Sunrise Project, Lock the Gate Alliance and Solar Citizens. For the #StopAdani campaign she produced and directed Guarding the Galilee (2017) and A Mighty Force (2018). Nell produced, directed and presented Film Crème (2012) for the Ovation Channel; was the Australasian presenter of The Art Club and Hot Spots for CNN International, and was a regular broadcaster with ABC’s Radio National’s Arts Today. In print, her articles have appeared in publications including the Sydney Morning Herald, The Australian, Sunday Herald Sun and Vogue Australia. Nell now manages Jewels on Queen in her family’s historic building in Sydney’s Eastern Suburbs while working on other creative projects.