01
New York at 8am: I throw open the windows. Cars and cabs are already lined up at the gas station and I swear I can smell the urine on the sidewalk eleven stories below.

02
There is a young black woman singing, headphones on; really singing; beautiful voice – on an uptown 6 train. The car is packed. Packed. She faces the door, watches her reflection in the glass, and sings. Suddenly, she stops: “I’m sorry for the noise!” she yells loudly enough to quiet the entire car. All the passengers around her shake their heads, shrug: No, not noise.

03
I see Malik panhandling on 14th Street. We first met four years ago, the day after he’d been let out of prison. He’s been in halfway houses, ‘three quarter’ houses, homeless shelters, and I don’t know where else since. I have taken dozens of street portraits of him over the years; I always give him some money, clothes, food, Metro card, whatever I’ve got on me. Now he’s moving to Georgia. One of his kids lives there – he thinks.

“What about you? You are going to stay here or are you going to go?” he asks.

Malik shakes my hand and pulls me in for a hug.
“You stay strong in New York, nigga’! Stay strong!”

04
I have a dream about Oliver, the first since he died: I see him opening the door to the coat closet in our apartment. He has his shirt off and his soft pajama trousers on. It seems as if he is looking for something that’s gone missing, as he often was, and I hear him murmuring softly to himself “... Now where is it?...”

I come up from behind and wrap him in a big hug, startling him – “Oh!” But he realizes it is me, and even though I can’t see his face, I can feel Oliver smiling. His body goes from tensed to relaxed in my arms. He keeps looking for whatever he was looking for, reaching up to the top shelf, while I keep hugging him.

I run a hand over his shiny head. Then I wake up.

05
Standing at a streetlight at 6th and Greenwich Avenue, I hear a young couple next to me talking about a large apartment building opposite, a prewar brownstone probably 25 stories high. They are gazing skyward, smiling and in awe – “Oh, look at those windows! And the ceilings!”

“Wouldn’t it be great to live there?” I say to them.

“We’ll just get, like, 30 people, cool people like us – normal – to go in on it, and then we’ll be able to live there,” the boy adds, as if just clarifying the arrangements.

We never get around to exchanging numbers. They go to the left; I keep going straight.

“Good night,” I call to them over my shoulder.

06
I wake the middle of the night. I pass the window and notice a man in a white dress shirt running at full speed up the middle of 8th Avenue, and he is holding a white bag in his hands. He is gone in a flash. I wait to see if he was being chased, but no.

What was in the white bag?

So many different scenarios go through my mind. It takes an hour to fall back asleep. 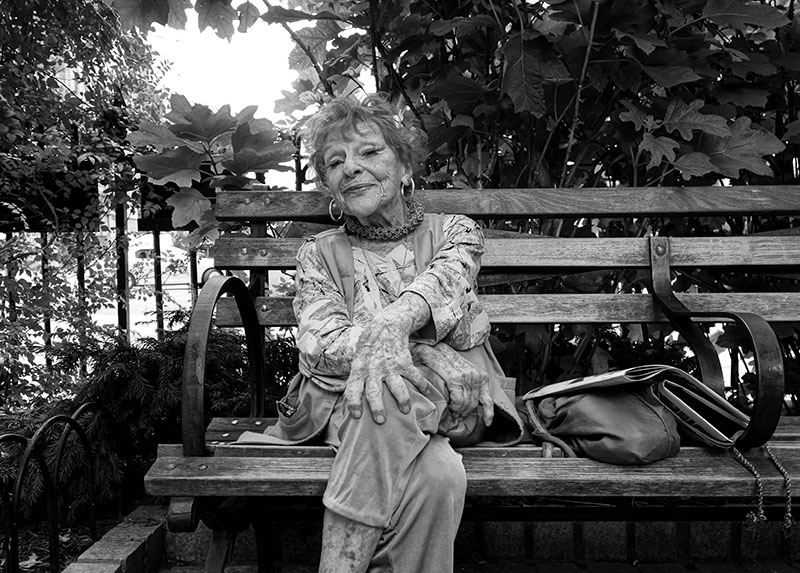 07
A beautiful Sunday: clear, brisk, even chilly, and a feeling of letting go, relaxing.

Walking up 9th Avenue, I see an older man with a wonderful, deeply furrowed face. I approach and ask if I can take his picture.

He declines immediately. “I’m waiting for the sun,” says the man sitting on a hydrant in the shadows.

08
A very tall man, 6'4" or more – my age at least; handsome face – stands on the subway platform with a very small girl (four, maybe five years old); she doesn't even reach his knees. She is immaculately dressed, all in bright greens and pinks, and her hair is a garden of blooms, each fixed with a light pink ribbon.

His skin is the colour and sheen of coffee beans; hers is caramel with lots of cream. She holds his hand; it must be her grandfather, I think to myself. The subway is delayed. He distracts her by dancing, taking both her hands in his and dancing; music in his head. She giggles. When he lets go of her hands, she keeps dancing on her own and now he laughs; a little girl dancing freely on the subway platform, so sweet but also fascinating: you can see how rhythm is built into the body.

A subway arrives, and he ushers her on, holding her cat-sized hand in his giant paw. They sit across from me; the tiny girl is pinioned safely between the big man's knees.

He nods, like it's no big deal. “Had to learn how. I have six daughters. Viv here is my youngest.”

The man smiles, a touch rueful. The little girl looks up at her dad. He opens a small bottle of water and holds it to her mouth. She takes a drink of water.

09
I stop by the smoke shop down the block. It’s about 6 o’clock. Ali has arrived for work just as Bobby is leaving for the day. I’ve hardly ever seen them here together; it’s either one or the other behind the counter. They are talking about something with great vigor and animation — at least, that’s how it appears to me. I can’t understand a word they’re saying.

“Gentlemen. Gentlemen?” I can hardly get their attention, they’re so enthralled. Finally, I have to interrupt: “Hey, what are you two arguing about? And, which language are you speaking?”

“Punjabi,” says Ali, ignoring my first question. Bobby has walked away, into the back somewhere. Ali calls after him, as if getting in a final jab. He can’t disguise his delight. He is a cat waiting for the mouse to return to play.

Moments pass. Bobby is back at the counter, as if nothing had passed between them, and I have to smile: Here they are, side by side, these two from whom I’ve been buying Sunday papers and rolling papers, bottles of water and Kit Kat bars for the past eight years: one Muslim man, one Hindu, matching mischievous grins on their light brown faces.

“Yes?” says Ali.
“Mr. Billy, what we can do for you?” says Bobby, feigning seriousness.

Now I can’t even remember what I came in here for, so I change course. “Teach me a word in Punjabi,” I say. “Just one word.”

They stare back at me, waiting for a prompt.
“Hold on, let me think. What is – um, what is the Punjabi word for beauty?”

They look at one another.
“Sohni,” says Bobby.
Ali nods, “Yes,” then adds, “but it’s sohna if you’re talking about a man – sohna, not sohni.”

10
I spot a kid on the corner holding one of those signs for a ‘Furniture Warehouse Sale’ someplace. The sun is blazing. He is just 18 or 19 and has a pale, freckled face, already sunburned. After I take his picture, we start talking and I notice the tattoo on his forearm – a crest of some sort; it looks fresh.

I don’t know what I expected him to say, but I did not expect him to say that.

“My family is the best. The best. They raised me like I’m theirs.”
“You are theirs,” I say.

11
Early evening: I see a handsome white guy in a suit and tie puzzling a long time over the too many choices at a bodega flower stand. I notice he wears a wedding band.

“Need help deciding?” I ask.
“That would be awesome, man,” he replies.

I steer him away from the roses and toward more interesting, wilder species. 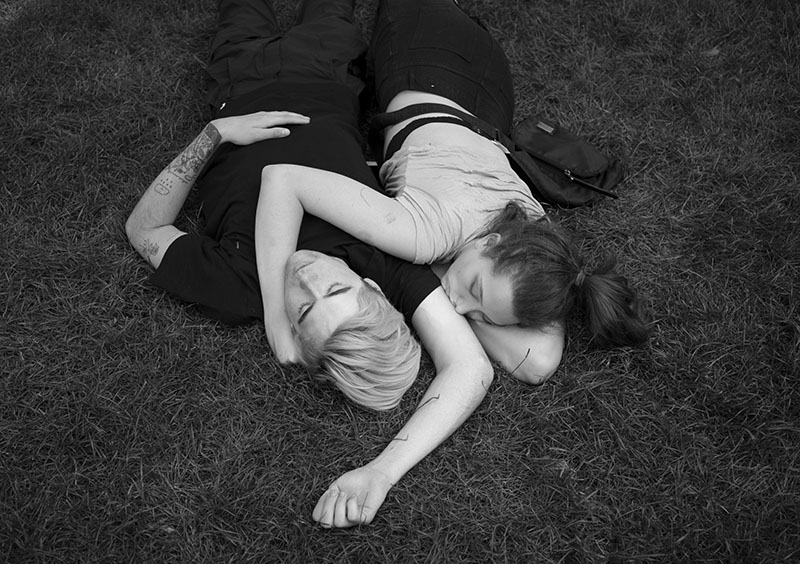 12
Stuck in sluggish traffic on the way to JFK – getting out of town for a few days. Running late – more bored than stressed – I ask the driver what his plans are for tonight.

He looks at me in the rear-view, black circles under his eyes. “I’m in love.”
“You’re in love?”
He nods.

“What a good reason for insomnia,” I say.
“Yeah, but… I got such a bad headache – my whole head.”
He puts his large, sexy, light-brown hands to his temples.

Love’ll do that, I think to myself.

“ — No, no, just met, two weeks, back home; just got back a couple days ago.” He sighs.
“Didn’t expect it. I’ve known her family so long. I’m thirty-five…” His voice trailed off.

Funny: he’d listed three excellent conditions for falling in love, it seemed to me, not for it to be unexpected.

We ride for a while.

“Congratulations.” I give him my card and ask him to invite me to the wedding.
“I’ll take photos,” I say. The recipient of a Guggenheim Fellowship in nonfiction, Bill Hayes is a frequent contributor to The New York Times and is the author of four books: Insomniac City: New York, Oliver Sacks, and Me; Sleep Demons; Five Quarts; and The Anatomist. Hayes is also an established photographer, with credits including The New Yorker, Vanity Fair, and The New York Times. A collection of his street photography, How New York Breaks Your Heart, was published last year by Bloomsbury. A former lecturer at NYU, UCSF, and University of Virginia, he also serves as a co-editor of Dr. Sacks’ posthumously published work (Gratitude, The River of Consciousness, and Everything In Its Place). Hayes, 58, lives in New York City.