The Power of Three

Can we possibly know what we want before we know ourselves?

Desire is a hollow drum, throbbing ceaselessly, promising all but delivering nothing of substance. The hot air of short term relief followed by the insistent return of the beat of discontent.

We want safety and control, but not a boring life. Approval is lovely, but not at the expense of individuality. We want to be free to follow our purpose and passions, but we don’t want to be alone. We want to be at the top of our game, but our excellence might need witness.

We don’t want falseness, we yearn for genuine connection, but let us not be entrapped. We want to see the truth of things so we understand, because we believe that this will solve our problems. But we don’t want our prejudices to be assailed by inconvenient truths. Finally, we want uplifting, even transcendent experiences, whether in church, with our devices, or in the garden, provided they and we remain normal.

Much desire here. Does it all boil down to control and freedom, money and status, sex and love, knowledge and power? Our artists say, no, it doesn’t. Along with scientists, they contend that none of the above create happiness.

Our artists are the biographers of our psychology and also the keepers of our conscience. We watch and wonder at people who win wealth, and those who have it thrust upon them, and we wonder about ourselves. What would I choose?

Are desire and self-knowledge separable? Can we possibly know what we want before we know ourselves?

If it’s true that our artists chart our psychology, then the answer again is, ‘No!’ Through the history of story runs a pattern: the three wishes. For example, a fisherman and his wife are offered three wishes by a magic fish. They waste the first two boons carelessly or foolishly. They spend the last undoing the consequences of the first. 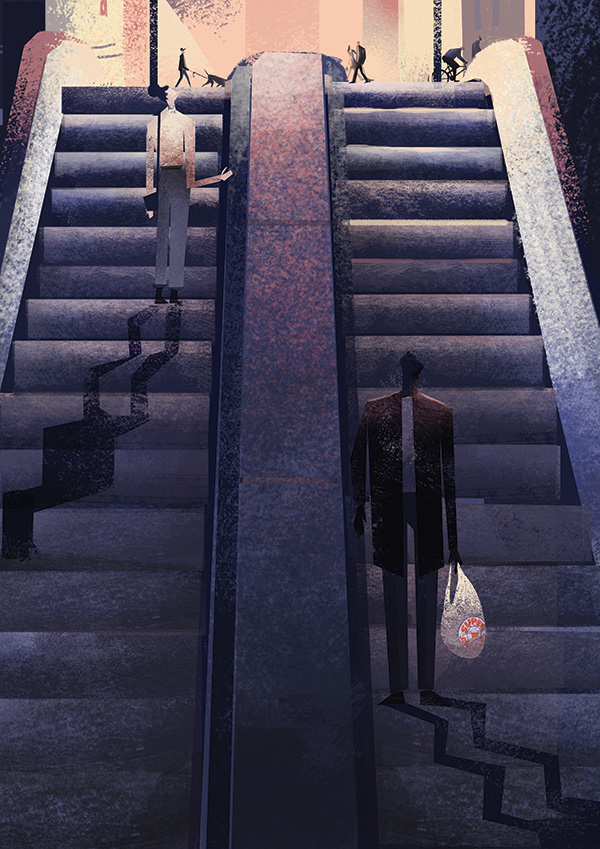 Be careful what you wish for, is the caution in such fables for the young. The ‘winners’ of the three wishes asked for what gratified them, not for what might have changed them, their lives or their world. At the end of the story they are regretful but remain as they were.

The nineteenth century was given less to introspection than to changing the world. Oscar Wilde, aesthete by nature and dilettante by indulgence, was a contemporary of Charles Dickens. Although they shared a desire to illuminate the social injustices and hypocrisies of their time, Wilde was not moved to sympathetic appreciation of Dickens’ work.

Both contemporaries had enjoyed childhoods free from want. Dickens’ father was a bankrupt and imprisonment exposed a ten year old Charles to the realities of poverty and to what justice looked like for the poor. As a journalist and novelist, he exposed his society to itself. By contrast, Wilde enjoyed privilege and ease.

Yet, while provoking Society with his wit and style, he wrote penetrating and uncomfortable social criticism, especially in his collection of gentle, whimsical and moving short stories, which included The Young King.

“Our artists are the biographers of our psychology and also the keepers of our conscience.”

“You would have to have a heart of stone to read the death of little Nell without bursting into laughter,” Wilde notoriously quipped of one of Dickens’ most sentimental and well loved deathbed scenes. (As Shakespeare observed, two suns hold not their course in one sphere.) Yet both Dickens and Wilde have written stories with a common structure and theme.

Both the better known A Christmas Carol and Wilde’s The Young King follow our old friend, the tale of three wishes. Each starts with a protagonist who reflects the author.

Scrooge, the richest, meanest and most disliked man in the city, donates only to the prisons and workhouses where the needy poor presumably belong. Scrooge embodies Dickens’ heartless money man who is heedless of the consequences to others of his choices. He takes a grim comfort in his stance and is certain of its rightness when challenged. He requires in his life nothing but the accumulation of wealth through success in business. He knows the cost of everything and the value of nothing.

Wilde’s Young King, raised in obscure poverty, has been restored to his now entitled wealth. At last he is able to follow his, and the aesthete’s great love, Beauty. This is not love of beauty in people but love of beautiful things which must then be possessed and displayed. He knows their value but not their cost.

Good stories and performances draw us into a world where anything can happen. They have transformative power. Fishes grant wishes. Ghosts take us on rides to show us the past, present and future outcomes of our choices. Dreams confront us with realities which in waking life we avoid and ignore.

“Dickens and Wilde present characters who do not know themselves.”

The Fisher couple of old who wasted their three wishes may have been informed by the moral of their fable, but they have not walked the Hero’s Journey and nor did we in their company.

Dickens and Wilde present characters who do not know themselves. They are so distracted by desire for something outside of themselves that they forget themselves: forget who they are, and what they truly need. The possession of what is powerful or beautiful does not nourish them.

Scrooge has closed his heart, lost his love and squeezed joy from his life. When his self-deception is dissolved through being shown three horrendous perspectives, he suffers the pain of regret, steps into repairing his damaged relationships and begins to offer love. Only then can he receive love.

The Young King, worshipped Beauty, but was blind to the human cost of its demanded creation. He too required three confrontations with the suffering he caused. His new heart compassion brought him courage to stand his ground before both crowd and peer disapproval for the sake of a higher call to true Kingship in service to his people.

Scrooge and the Young King are transformed. By final curtain Scrooge still makes money, the Young King still rules his kingdom, but now there is heart in the mix. They live from more of the whole of themselves. They are changed, as are their communities and their world.

Their hearts deepest wish has become their desire. Dr Viliunas is a psychiatrist who has taught at secondary, tertiary and postgraduate level, in Arts, Science, Environmental and Psychological Medicine; performed regular medical segments on radio and television; served on the Psychologists Board of Queensland, consulted to the Medical Board of Queensland, and provided mentoring and professional supervision. A long-standing appreciation of the subtlety and potency of psychological wisdom enshrined in language and the arts has drawn her to orient her work towards integrative psychiatry, specialist psychotherapy, corporate mentoring and medical ethics.